Two events of interest with short notice: Save the Date! Friday, Sept. 27: The Buffalo people are coming to town!

Update from the Mattole Forest Campaign

By Karen On August 21, 2019 · Leave a Comment
Update from the Mattole Forest Campaign

After 60 days in the canopy, Rook has returned to the ground…
Message from Rook: 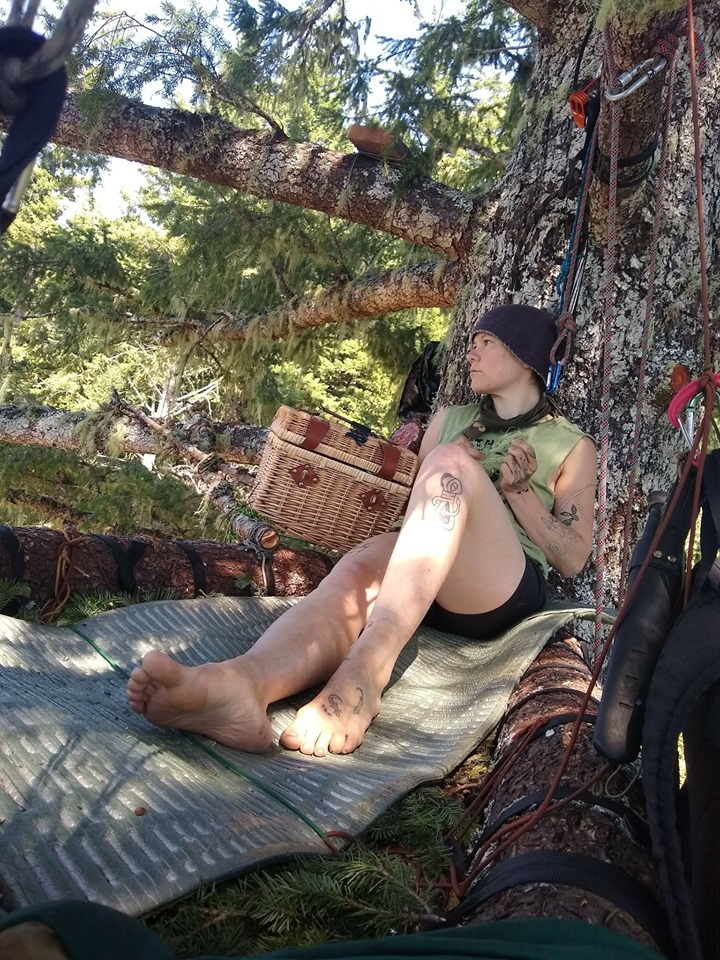 “After two months living in Trickster, I’m on the ground again. I’m not some arboreal creature. I can’t live 100 ft. up sitting on a net, eating clif bars indefinitely. I did what I could as long as I could, and I desperately hope it was enough.

All those weeks ago, when I lost the traverse to other trees, which would have blocked the road, I had to figure out my priority. Do I try for a more strategic position, or stay here until there is at least a chance that Trickster will survive this? What matters more – protecting one worthy tree, or sacrificing it to relentlessly dog the company elsewhere?

I decided to stay, of course. Every day I decided that for the many gifts that trees give, and we so thanklessly take, I owe this one better then to abandon it as spent tactic.  Now the fallers are long gone, it’s been weeks since any trees have been cut. The logs have all been hauled up to the road to be loaded on trucks and sent away, and I decided it was time to go.

I have no power over what happens next. In good faith, I gave warning before coming down. I removed everything from the tree and took it out with me. The swaying, cradle of a net I’ve been living in crumpled down into a messy tangle that fits easily into a grocery bag!
I was not arrested, but driven to a nearby town, where friends waited. It’s appreciated, as a sign of de-escalation. I hope this bodes well for Trickster. I do actually think HRC may be better than timber companies who will spitefully cut a tree, profitably or not, who someone, in hope and love, tried to protect. I hope they are satisfied – they got what they wanted, barely hindered. Every other tree they marked for cut on this hillside is either on the ground or in the sawmills.

I don’t actually talk to trees a lot. Ain’t that kind of tree hugger most days. But, the first night, in the quiet, satisfied time after the big push to hike gear in and haul it up, but before the threat and noise and endless scrutiny of the Lear [Security] occupation, I felt very aware of trees as living beings. More then just big forest structures. I only ever said out loud; “Trickster, I hope you live”. -Rook

On August 31-Sept. 7, activists and forest lovers will converge at Owl Camp to defend Rainbow Ridge and the Mattole watershed from harmful corporate logging, land which was stolen from the indigenous Mattole people through acts of genocide and forced relocation in the 1800’s.

Owl Camp will be a week of actions and workshops in support of the ongoing direct action on Rainbow Ridge. Owl Camp will provide support, education, and training for those engaging in the front lines struggle to protect this threatened temperate rainforest ecosystem. 2019 marks 21 years of ongoing nonviolent direct action to protect this place from destructive timber extraction and toxic herbicides!

We strive to make camp a brave space and are able to offer safer spaces for those who need it! A sleeping area is available to two-spirit, transpeople and women. Common spaces will be alcohol-free.

Volunteers are needed to take on roles like driving, hiking, kitchen, photography, art, musicians and dishwashing expertise. Let us know what skills and resources you can bring to camp.

RSVP for details and directions efhum@riseup.net.

Update on Northern Spotted Owl habitat area:
The new spotted owl activity center that was located by HRC within one of the Long Ridge logging plans had been surrounded by a 72 acre no-cut buffer zone, as required by law until the end of August, when nesting season supposedly ends. However, during the logging operation the CA Dept. of Fish and Wildlife allowed the company to designate a mere 18 acres as a no-cut zone and log in the rest of the buffer.

Forest defenders are preparing fierce resistance to stop Humboldt Redwood Company’s destruction of the newly discovered nesting site of a Northern Spotted Owl. This owl habitat, protected only until August 31, is 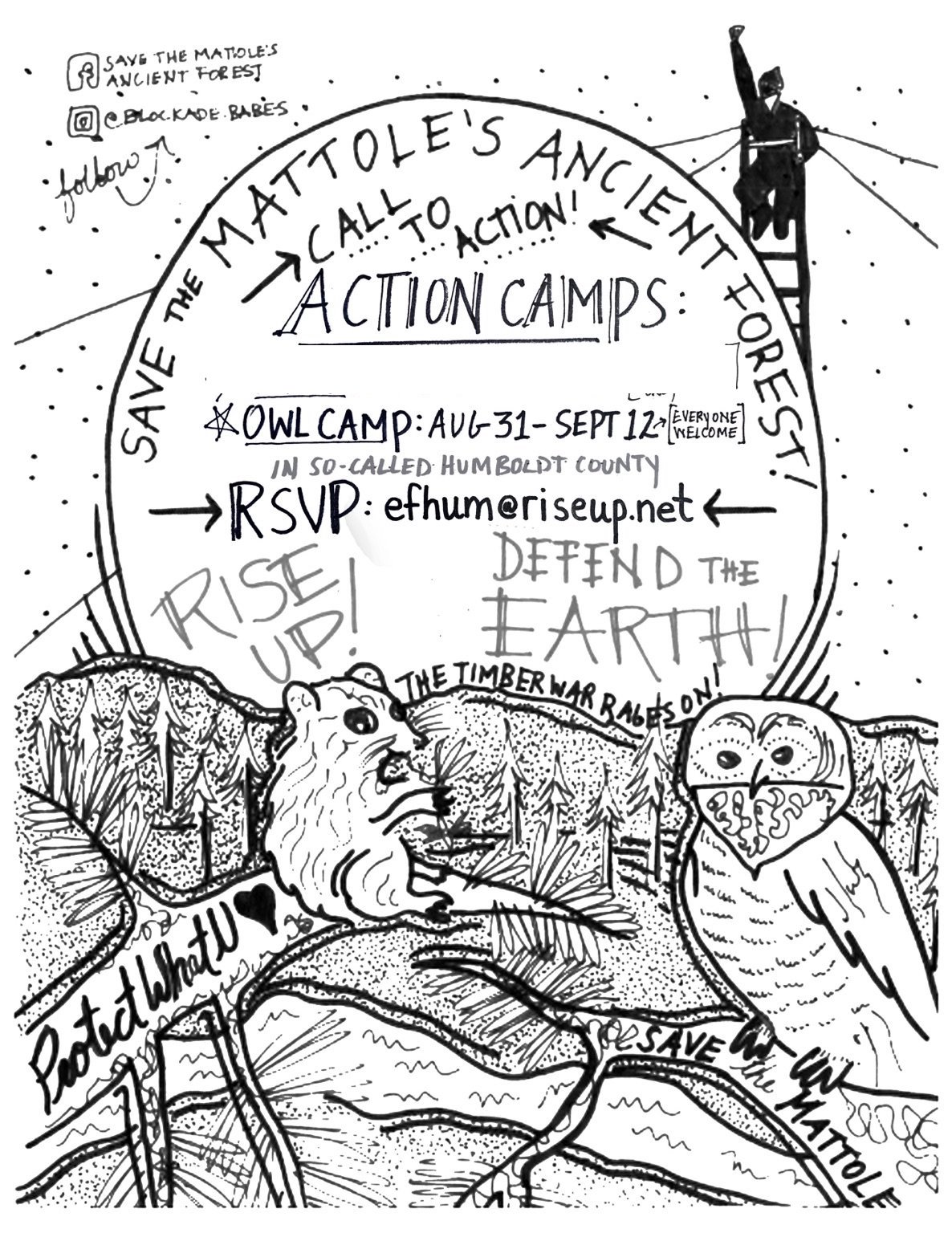 nestled in the middle of a timber harvest plan area that will expire September 11, giving HRC only 11 days to log this sensitive species habitat. Show up to defend!

Base camp will be located at an outdoor group camp. Vehicle parking is quite limited, so please be in touch to coordinate rides. Childcare during camp will be available. There are many roles to fill during camp, in and out of the woods.

As the situation escalates, forest defense in the Mattole has become a year round effort. Your involvement makes a big impact! Monetary and gear donations also help make it happen! Please consider contributing: Online fundraiser at https://tinyurl.com/SupportOwlCamp.
See Save the Mattole’s Ancient Forest FB page for the direct action campaign
See the Lost Coast League’s site for their work and the forest’s story.