An action-packed and high stakes scenario continues to unfold in the remote forests near the ocean in the Lost Coast area in the Mattole River watershed that has all the elements of an action film—courageous people risking life and limb perching atop tall trees and blockade structures, masked security crawling up a tree to cut food and water supplies, respected elders trekking out to the middle of a dirt road in the pre-dawn darkness, and even cute fuzzy critters hanging on to their declining population by a thread. It would be good viewing, but we want to change the channel, save the trees and the cute fuzzies and come around to something sustainable.
(Photo is Sonoma Tree Vole, prey of Spotted Owls, looking for nest materials in tree-sitter Rook’s tree)

Our last alert on June 17  covered a dramatic mono-pod blockade in mid June. The month has looked something like this, up in the beautiful but threatened forests of the Mattole:

(links to our press releases and other for the stories)

Just before the June 12 action camp was due to open, 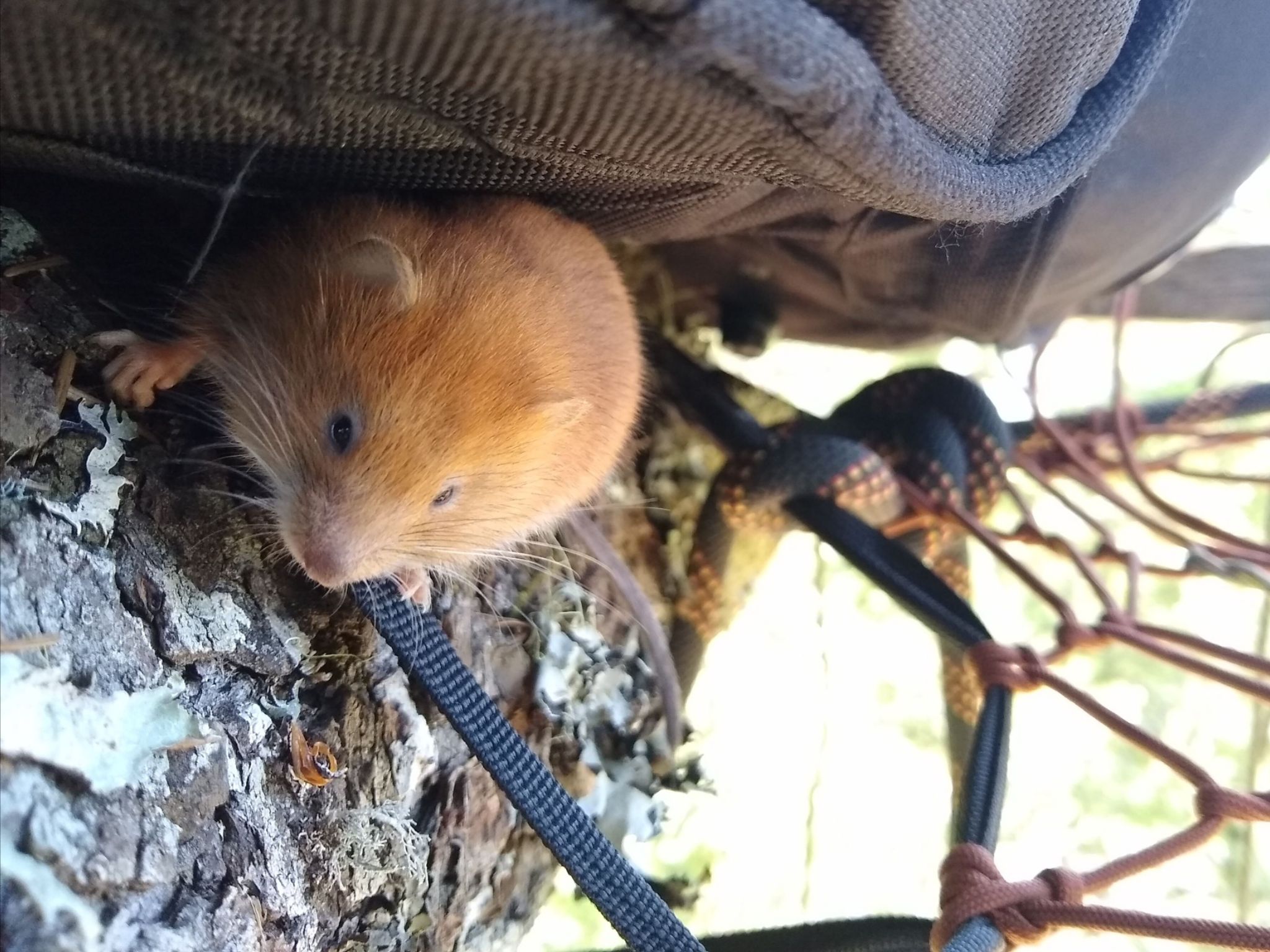 June 3  on brink of Timber Harvest Plan (THP) approval, Lear security and other HRC personnel established a presence in the forest.

June 13 Masked climber goes up Rook’s tree, cutting down her gear, food and water and cutting branches all around her perch.

June 24 After resupply arrest and excavator arrest, total = 10 arrests; there have been several since then.

June 25 Multi Generational Blockade
…Many more plans in the works. Plus Action Camps coming up in August.

Meanwhile, the non-profit Lost Coast League moves forward with their challenge to HRC’s sustainable certification, based on widespread herbicide use (exposing their plans for plantation forestry) and targeting of high conservation value forests for cutting. As a LCL spokesperson said, “HRC can’t have it both ways—Legally, they can fragment the last stand of this kind in California, but they cannot call it sustainable.” Their certification ends up being a lie.

This forest is high value in terms of fisheries and habitat, and is the very last intact coastal native forests and prairies.

Direct action and grassroots organizing to protect the Mattole Forest from industrial logging has a history dating back to the 1990s, when Charles Hurwitz’ Maxxam corporation was fiercely logging and liquidating the assets of Pacific Lumber, former owner of 200,000 acres of forestland in northern California. When Humboldt Redwood Company acquired the former PL property in 2008 after PL filed for bankruptcy, they promised to end clearcutting and preserve old-growth forest.

Since 2014, there have been tree-sits, road blockades and other direct action on Rainbow Ridge, stopping most of the logging there. The forest defenders have also monitored the forest, uncovering valuable information about the state of the forest and where the most vulnerable areas are.

Others in the southern Humboldt community have, over many years, carried out cutting edge restoration on the riparian areas, bringing back healthy fisheries through those efforts.

Check out the forest defenders pages to see how to support or participate in the on-going forest defense:
Save the Mattole’s Ancient Forest on facebook–check out the amazing photos
gofundme page
@blockadebabes on Instagram