Join us at 11am at Park Blvd and E34 St in Oakland on Tuesday, May 24 to celebrate and honor Judi Bari and Dennis Cunningham. We’ll create a street mural and speak out as we renew our defense of civil liberties and biodiversity on earth! The 32nd anniversary of the politically-motivated and nearly deadly 1990 bomb attack on Earth First!ers Judi Bari and Darryl Cherney is May 24, 2022. We’ll gather at 11 am at the place where the bomb exploded and nearly killed the activists. Join us so together we can create revolutionary art in the street (wear clothes you can paint in) and hang banners and pictures! After creating street art, we will mark the moment of the bombing—12 noon—as a memory against forgetting, and have a speak out about Judi and Dennis and defending Mother Earth.  E. 34 St. and Park Blvd. (next to Oakland High), near MacArthur Blvd in Oakland  This year on Judi Bari Day we will also honor and remember legendary civil rights attorney Dennis Cunningham—Judi and Darryl’s lawyer who ultimately won a historic Constitutional rights case against the FBI and OPD for their anti-investigation of the bombing and their violations of Judi and Darryl’s civil rights.  The capsule history:  On May 24, 1990, a pipe bomb planted in the car of Earth First! activist Judi Bari exploded, sending her and fellow activist Darryl Cherney to the hospital in Oakland—Judi with life-threatening injuries, since the bomb had been hidden directly under her driver’s seat.  Judi and Darryl were on their way to a roadshow event, organizing for Earth First! Redwood Summer.  That explosion, and  subsequent attack on Earth First! and on Judi and Darryl, by the FBI and Oakland police would forever change the face of forest activism in the redwoods and elsewhere. 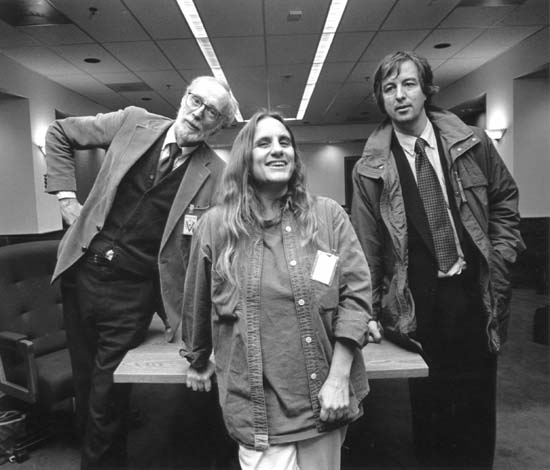 The bomber was never found, and the FBI never conducted a serious investigation, choosing instead to blame and harass Earth First! activists, attempting to frame Bari and Cherney for bombing themselves. The City of Oakland subsequently designated May 24 as Judi Bari Day. An exhibit dedicated to Judi at the Mendocino County Historical Museum last fall put the bombed car and other artifacts on display along with activist panels. See those panels on You Tube at this link, and view the feature length film,  “Who Bombed Judi Bari?” on YouTube. It tells the story of the bombing, Redwood Summer, Earth First! and much more.  Info for this event at bach [at] headwaterspreserve[.]orgPhoto credits: Dennis with Judi and Bill Simpich by Evan Johnson