Recent News From the Forests of the Northcoast

In most of past forest preservation campaigns, forest defenders were going nose to nose with big corporations like Sierra Pacific Industries, Green Diamond, Mendocino/Humboldt Redwood Co.,Pacific Lumber/Maxxam, etc.  But in 2021 and 2022, the bad management practices  decimating increasingly scarce forest habitat in Northern California have different players: CalFire and PG&E. They are not the only ones by any stretch, but two of the most active campaigns right now responding to reckless logging are unfolding in Jackson Demonstration State Forest (JDSF) on the Mendocino Coast, and surprisingly, in Humboldt Redwoods State Park, the iconic park off Highway 101 with cathedrals of towering ancient redwoods, home of Rockefeller Grove, Founders’ Tree and rare old-growth-dependent species, protected as a state park since 1921 when the first grove was acquired.

Logging plans significantly increased in 2020, raising alarm. There is logging on this public land, in the interest of “demonstrating” sound and sustainable logging practices, showing that forestland can be economically productive without its habitat and aesthetic values being destroyed, but reasons for increased logging were not adequately explained by state officials. When the logging started in spring of 2021, forest defenders took to the trees, other activists took to the phones and the courts. Tree sits, gate blockades, rallies and other direct action have increased and persisted since then, joined by long time north coast forest activists, Tribal activists from the Coyote Valley Reservation and youth from nearby communities.

In Nov. 2021, the Mendocino Board of Supervisors unanimously approved a resolution calling for scientific review of JDSF to determine the Forest Management Plan’s conformance to Governor Newsom’s conservation policies requiring 30% of California public lands to be set aside by 2030 to combat the climate crisis.
Jackson Forest is a prime candidate for inclusion in Newsom’s “30 x 30 Plan.” “Redwood trees are climate change heroes,” said high school activist and youth organizer at a recent Jackson Forest rally.

Then on January 20 activists were first stunned, then elated, when CalFire Natural Resources Deputy Director Matthew Reischman confirmed that, “Due to delays in Timber Harvest Plan approvals and 2021 planned operations, no additional timber sales will be offered in 2022.” A core demand has been a moratorium on logging  in the 47,000 acre forest. While the hiatus in new timber sales is the functional equivalent of a moratorium,  several plans are still in various stages of the approval process.

Tribal Co-Management is on the Table. 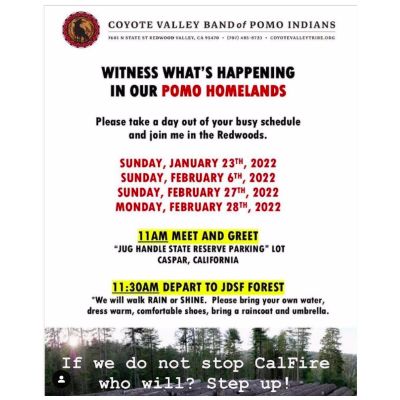 On January 31, 2022, Michael Hunter, Chairman of the Coyote Valley Band of Pomo Indians sent a  letter to Governor Newsom requesting immediate initiation of government-to-government consultations for Tribal-State Co-management of Jackson Demonstration State Forest which is located in the Tribe’s Northern Pomo and Coast Yuki ancestral territory.

Chairman Hunter premises his Tribe’s request for Co-management pursuant to the authority of a new state policy directive: Statement of Administration Policy Native American Ancestral Lands September 25, 2020, which declares that “in the spirit of truth and healing in recognition of past harms done to California Native American communities, it is the policy of this administration to encourage every State agency, Department, Board and Commission (collectively, “entities”) subject to my executive control to seek opportunities to support California tribes’ co-management of and access to natural lands that are within a California tribe’s ancestral land and under the ownership or control of the State of California, and to work cooperatively with California tribes that are interested in acquiring natural lands in excess of State needs.” This policy, if enacted, is historic and long overdue.

Walk the forest and meet the people involved!

There have been hikes in the forest, led by Chairman Michael Hunter of the Coyote Valley Band of Pomo Indians, entitled, “Witness What’s Happening in Our Pomo Homelands.”  The next hike is Feb. 27, followed by another on Feb. 28, meeting at 11 am at the Jughandle State Reserve parking area in Caspar, CA.

For details on the hike and more information about ongoing forest defense, see SaveJackson.org and the Mama Tree Network on Instagram. There’s lots more planned!

Resistance continues as PG&E resumes cutting habitat in Humboldt Redwood State Park.
In January, contractors for PG&E attempted to resume controversial tree cutting work that began in the fall of 2021 along powerlines running through Humboldt Redwoods State Park (HRSP). Forest defenders were able to prevent most of the cutting on that day and the next by standing under threatened trees. But the threat has not been withdrawn.  Utility giant PG&E contracted with A&E Tree Service, who forest protectors say are continuing a streak of intentionally cutting branches and trees dangerously close to those trying to save them. For three full months this beloved Humboldt Redwoods State Park has been a battleground where tree clearing crews hired by PG&E have faced determined resistance from a coalition of forest defenders.   This cutting is part of PG&E’s Enhanced Vegetation Management (EVM) Plan which calls for clearing of forest along 25,000 miles of powerlines in northern California. According to PG&E’s own documents, the entire EVM project is predicted to reduce ignitions by 2% while costing ratepayers almost 2 billion dollars. Meanwhile, forest defenders are calling attention to the habitat at risk, highlighted by cutting in a park preserving ancient redwoods. You can access an excellent piece in Counterpunch by Lost Coast resident Ellen Taylor at this link.

For news on the resistence to the cutting, see @treesittersunion.local707 on Instagram