By Karen On July 26, 2018 · Leave a Comment
Two people have locked themselves to “Monument Gate” – five miles up the mountain from the town of Rio Dell – to prevent Humboldt Redwood Company (HRC) from gaining access to the Rainbow Ridge area of the Mattole River watershed, where HRC has two active Timber Harvest Plans to log in un-entered Douglas fir forests. 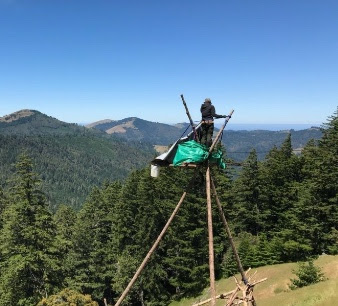 On Sunday, July 22, HRC, through a paramilitary-style security contractor, Lear Asset Management, raided the tall tri-pod road blockade on Long Ridge, immediately threatened two forest defenders with tasers and called Humboldt County Sheriff’s to arrest them They also stole survival gear, and posted 24/7 security at the blockade. On Wednesday, July 25, HRC again had the security contractor threaten a forest defender who was staffing a tree sit nearby with a forced and dangerous extraction from the tree, had her arrested, and dismantled the tri-pod blockade.  The blockade and tree sit were erected a month ago to prevent the timber company from beginning work operations.

Humboldt Redwood Co., as well as Mendocino Redwood Company in the county just south of Humboldt, is owned by San Francisco’s Fisher family, owners of the GAP empire, including the Old Navy and Banana Republic stores. Their corporate headquarters is in San Francisco. The Fishers themselves deny day to day involvement in the timber company’s policies, but as owners, they are the bottom-line decision-makers, and need to feel the heat. Their phone number in SF is 800-333-7899.

Tell them you will support a boycott of their stores if these practices continue.

Supporters of the forest defenders, including Mattole Valley residents, have been at Monument Gate every morning since Sunday’s raid to show solidarity with the people blocking the road and opposition to HRC’s planned logging and herbicide operations.

Today, two more forest defenders are engaged in non-violent direct action, placing themselves within the gate to stop any potential threat to the Mattole River’s ancient forest and to highlight the importance of protecting the area. The Mattole watershed has been an area protected by community direct action since 1998, and will continue to be until it is rightfully preserved.

Rainbow Ridge area is the most seismically active region in the continental U.S. and is vital habitat for rare and endangered species such as the Pacific fisher, Coho salmon, Northern goshawk, Golden eagle,Northern spotted owl, and a large distinctive type of old-growth-dependent medicinal fungus, the agarikon. The area contains over 1100 acres of ancient Douglas fir and hardwoods. Industrial timber operations such as those undertaken by HRC can be especially damaging because of the area’s highly unstable soils and steep, landslide-prone terrain. HRC failed to report a recent and severe landslide to the state in its required impact assessment of the area that it now wants to log. Forest defenders are vital in stopping logging trucks and crews from moving in to begin felling trees.

One defender in Thursday’s action has said that “HRC and the Fisher family exist at a nexus of multiple systems of domination. The Fishers profit on everything from political influence, sweat shops, and environmental degradation of indigenous ancestral lands. I’m here to directly resist their influence.”

Call the GAP corporate headquarters today! Tell them to use their ownership leverage to END the assault on the non-violent protesters, and pull logging crews out of old growth forest! 800-333-7899.
If you enjoyed this article, please consider sharing it!